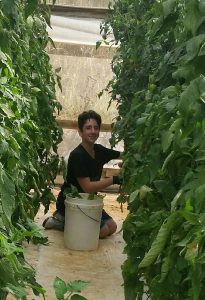 From the coast to the mountains. A spark of an idea becomes a reality. Following a magical visit to Linuwel School by students from the Little Yarra Steiner School (LYSS) ensemble in 2017 Taylor became awestruck by their ensemble. Our music students had the opportunity to play with the ensemble and Taylor said it “felt like performing in a full orchestra”. The following year Taylor sent LYSS an expression of interest in joining the school and the ensemble for a term in 2019. LYSS were very open to the idea. After a tense time organising a home stay around the business of everyone’s lives, and wondering if it was actually going to come off, Taylor flew to Victoria at the end of our week 1. He has been welcomed with open arms by the warm-hearted folk at Little Yarra. LYSS is situated in the Dandenong Ranges, a very different place and space to Taylor’s coastal home. Taylor is living with a beautiful family who operate a market garden, and he’s earning some extra pocket money by working on their farm. Taylor has realised his dream of being a part of the LYSS ensemble and will be performing Bach with them at St Paul’s Cathedral in Melbourne on the last evening of term.