I have just come back from an absolutely amazing experience of music, drama and fun.

Lead by the incredible Judith Clingan, a group of 77 people from all over the world – Taiwan, Japan, India, Switzerland, and Australia – toured Southern Australia with a musical theatre piece, choir songs, and other musical, theatrical and dance pieces. I was lucky to be a part of this and even luckier to receive a lead role in the main musical theatre piece, Harmonia Mundi.

For two weeks we rehearsed in Canberra, our schedule full from breakfast at 7 am until after dinner. Even our ‘spare time’ was spent singing and practising. It was wonderful to spend time with people who loved singing and music.

With so many musical people, I took the opportunity to have a piece I had composed, for year 11 music, played by four flutes. It was exciting to hear my music live because before it had only been computer generated sound. We played my piece at some of the performances.

In the middle of our two weeks’ rehearsal time, the flu went through our group. One day we could only rehearse our choir songs because only two actors of the cast for Harmonia Mundi weren’t sick in bed. With four days to go until we started touring, our schedule was packed to the brim and overflowing to make up for lost time.

Tissues in hand, we travelled south with our show to Canberra, Cooma, Mansfield, Dandenong Ranges, Yarra Valley, Warranwood, Ballarat, Mt. Barker and Willunga. Each performance was new and exciting. Even backstage was a performance; we danced to the music, whispered the lines of the characters onstage, and shushed each other when the volume crept up.

Act One of the show consisted of a selection of choir songs that varied at each venue; “Finding Harmonia Mundi” – a choir piece with kazoos, a capitalist, dictator, beggar and three mamas; and “Fruits of Hope” – an orchestral piece with poetry and movement in which I played first flute.

Act Two was the musical theatre piece Harmonia Mundi. In this I played one of the main roles, Tori, a shapeshifting bird.

At some of the schools we split our group up and ran workshops for the children during the school day, where we taught them a few of our songs and showed them short cultural pieces from each of the countries represented by our group. Back together for a performance almost every night and then it was off again and onto the bus, our luggage, instruments, and props stowed beneath us. On the buses time was spent catching up on a bit of sleep or, of course, singing.

Spending four weeks with such enthusiastic musical people has inspired me with harmonies and ideas for my major work. I have made friends and formed connections that I hope will see me well into the future. I’d like to thank Linuwel School for supporting me to have this experience. 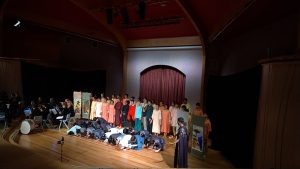